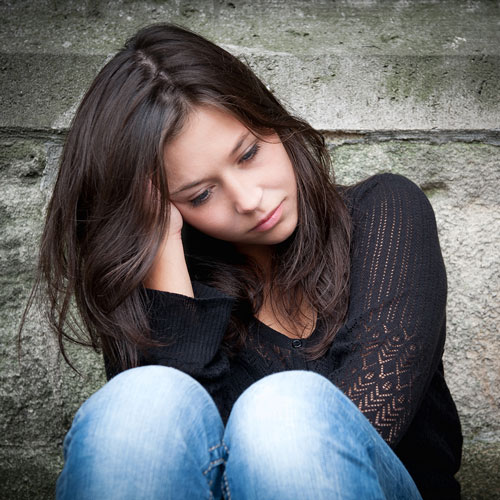 “I’m terrible, the world’s terrible, and everything’s always going to be terrible.” Have you ever felt this way? If you have anxiety disorder and feel this way regularly, you’re not alone. It’s common; so common, in fact, that Dr. Aaron Beck named this perspective the cognitive triad. It is the basic components that make up our belief system when we experience major depression. Is it true, though? Maybe…but you might want to consider some insights from cognitive science before you call on this one.

“Isn’t it obvious, though, if we just open our eyes? I mean, we shouldn’t bury our heads in the sand or look at the world through rose colored lenses. If we had the courage to see the world as it is, we’d probably be in despair, right?” Well, that’s partially true. It doesn’t take in to account that we are often blind, not only to the negative, but also to the positive. In fact, there’s good evidence to suggest that we’re likely more blind to the positive than the negative.

As humans, we’re prone to something called the negativity bias. It means that we naturally focus on, and magnify the bad, while dismissing the good. As Neuropsychologist, Rick Hanson puts it, our brains are like velcro for bad things, and teflon for good things. So, if you get five compliments during a day, four neutral things said about you, and one criticism, you’re likely to focus on that one criticism. Negative things about ourselves, and the world around us, tend to stick out like a sore thumb in our minds. We tend to quickly forget (or not even notice) the positive things.

Anxiety Disorder – Stories In Our Head

Along with the negativity bias, there are many other ways that our minds trick us. In his book, Thinking, Fast and Slow, Daniel Kahneman outlines a variety of ways (repeatedly demonstrated by research) that our minds fail us in interpreting our world, leaving us overly confident in our faulty perceptions and judgments of reality. A key component is the tendency of our minds to use heuristics, or mental short-cuts. One heuristic we all use is called the availability heuristic. It is the short-cut of taking only the information that is available to us, through what we see and hear. What other information are we going to use? We then making judgments, jumping to conclusions, and creating stories in our heads based on that information. The problem is, the information that we’re going off of is simply incomplete.

Dr. Jordan B. Peterson, professor of Psychology at the University of Toronto, explains that, “you don’t actually see the world. You see sufficiently useful, low-resolution representations of the world.” Low-resolution, because we need a lot of information for something to be high-resolution. (or to see it clearly as it is.) For example, if your only exposure to the ocean is the movie, Jaws, then you may view the ocean through anxiety disorder. It’s a breeding ground for man-eating great white sharks who are sure to be hunting you as soon as you set foot in the water.

Now, Jaws is a great movie, but it doesn’t give an accurate perspective on what the ocean is actually like. So, no matter how real it may seem and feel, this view of the ocean is simply not accurate. It’s based only on what you’ve seen and heard. (and the associated story that you’ve created in your head.) It’s leaving out huge chunks of information. Kahneman says that confidence in our perspectives and conclusions are often based more on the quality of the story, than on the quality and quantity of information.

When you combine the availability heuristic with negativity bias, you often overestimate negative things within yourself. You may disregard the positive, magnify the negative, and then create stories in your head to fill in gaps. This is why we tend to overestimate disasters and catastrophic events, which contributes to anxiety. Kahneman states that if you are asked to estimate the probability of a tsunami hitting California in the next thirty years, you are likely to overestimate, due to images of tsunamis coming to your mind. We tend to assume, “pickpocket,” when reading a sentence about a woman having a nice day in New York, and noticing that her purse is gone.

Kahneman also pointed to a study where people judged accidental death to be over 300 times more likely than death by diabetes. The true ratio is 1:4. Again, emotionally charged images of accidental deaths are readily available in the mind. That’s usually not the case with deaths by diabetes. The images and stories that stand out in our minds are more likely negative than positive. They have a great impact on these errors in judgment.

So, what can we do about it?

How can we work on having a more realistic and truthful perspective of the world? Well, simply understanding these concepts can help provide the insight and humility needed challenge our perceptions. Cognitive Behavioral Therapy, as well as other forms of individual and group counseling, can help further that work. It has been shown to be effective in the treatment of associated depression and anxiety.

One technique that you could start trying and implementing today is what Rick Hanson calls, “installing the good.” Along with his description of our brains being like velcro for bad and teflon for good, he also explains that our brains have buffers between the short and long-term memory that prevent the good from sinking in. Studies have shown that, one way we can help the good to sink in, is to just continue to think about it and focus on it for 10 to 20 seconds. You have a good experience, you notice it, and you enjoy it, letting it sink in. You can try this right now by thinking about someone who you know cares about you, or who has helped you in some way, and considering what they have done for you.

Experience the gratitude there…allow it to sink in for 10 to 20 seconds. Oftentimes, we forget about these positive things, we dismiss them, or we’re just too focused on the negative to think about the positive. Installing the good is a simple practice that won’t make a huge difference in an instant, but over time can shift the balance of anxiety disorder. There is a Buddhist saying that applies here: “Do not think lightly of good, saying, ‘it will not come to me.’ Drop by drop is the water pot filled; likewise the wise man, gathering it little by little, fills himself with good.”

This issue is much more complex than what has been presented here, and there are many factors which contribute to our views, feelings, and beliefs. Also, you may be convinced that your current worldview is completely accurate, just the way it is. I submit, though, that a more positive view of ourselves, the world, and the future, is typically not only more accurate, but also more likely to provide you with hope, confidence, and peace.