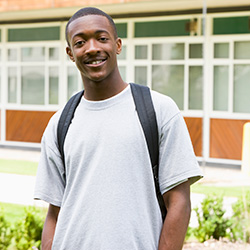 I was reading with my son the other day, and I could tell he wasn’t paying very close attention.  I asked him a simple question about what was meant by a specific phrase in the text, and he immediately hit the internal “panic button.”  I could see he was a little embarrassed that he’d been caught daydreaming. As panic turned into anxiety, he wasn’t able to come up with an answer.

I could visibly see his emotions well up and completely block his ability to reason.  He tried to re-read the text to get clues, but he was so emotionally hijacked that all reading comprehension had left him.  He was looking at the words, he could read them, but there was no understanding happening.  I expressed my confidence in him that he could find the answer and that he simply needed to calm down, so he could start thinking again.  That made the situation even worse.

In just a matter of seconds he went from feeling quite normal to fighting back tears of frustration simply because he didn’t know the answer.  I could see that the part of his brain called the amygdala had taken over.  It’s the part of the brain that is responsible for the fight, flight or freeze response.  He was totally freezing up with anxiety, and thankfully I had learned a few techniques to help him come out of it.

I began with a self awareness discussion to help him realize what was happening inside his head. I reassured him it is normal, and that he can have the ability to control it.  I briefly explained to him the function of the amygdala and how sometimes it can get triggered even when we’re in no real danger.  I also described the function of the forebrain which is responsible for logical thought process.  We talked about how in order for him to be able to come up with the answer to my original question he would first need to turn off that fight, flight and freeze response, and then he could elevate his thinking to the forebrain.

This little bit of education was enough to help him snap out of it and return to a logical thought process.  He reread the text and was now able to come up with the correct answer.  While I was glad he got the answer right, I was even more proud of him for taking control of his thinking.  Using a little education as a mindfulness practice he was able to overcome that stressful situation and the anxiety welling up within him.

For many of us, anxiety is gripping.  It may take several distress tolerance tools to move our brain function from the amygdala to the forebrain.  Whether we need these practices to get through a test at school, or a difficult social situation, they become tools to help us succeed throughout life.  There are more than a dozen mindfulness practices and like any tool the more we use them the better we get at using them.

One thought on “Freezing Up with Anxiety”